You are here: Home / Braun Reviews / Best Braun Shaver? Here Are Our Top 4

If you like foil electric shavers, then Braun is the brand for you. But with dozens of models and multiple product lines, how do you know which is the best Braun shaver?

Well, the answer will vary from person to person depending on what you wants and needs are.

However, based on our research we have narrowed down the best Braun Series 7 799cc-6 Wet & Dry Shaver System. But before we get into the details here is how we made the decision. 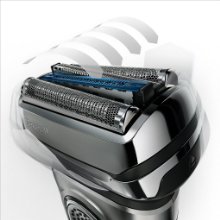 Max Braun started the company back in the early 1900’s making parts for radio sets.

By 1929 his business had grown so much that they were producing the entire radio and had moved to a larger location. They quickly became the premier radio producers in Germany.

During World War II, almost all of his Frankfurt factories were destroyed so he had to rebuild with only 150 employees.

Shortly after WWII, they began producing electric shavers in the early 1950’s which is what they are now famous for. They have even been purchased by larger companies such as Gillette in 1967  and Proctor & Gamble in 2005

When companies get bought like this it is because the bigger company sees potential in what they are doing and don’t want to try and compete with their own products. So, that right there should tell you Braun is doing something right.

Where Are The Shavers Made?

Braun is headquartered in Kronberg Germany. On most of their literature they lay tribute to their German engineering as being one of the best around.

Probably because of the long history they have established for making quality products.

Kronberg is also home to several other big name companies like 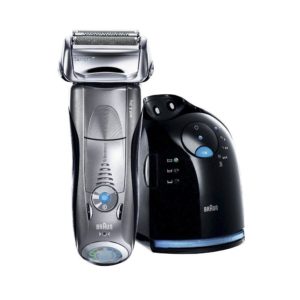 The Series 7 has been ranked #1 by many others in the industry and for good reason. We feel it has just the right balance of all the features you would look for in a nice electric shaver without having to pay the price of some of the series 9 models.

The 799cc-6 replaces the older Braun Series 790cc and in our opinion is better.

It is much more affordable to most people but brings a performance that is hard to match. You should be able to get at least 10 years out of this thing so when you breakout the costs that way we are talking about $30 per year for the razor.

This electric shaver is pretty smart. It comes stock with an intelligent sonic technology that allows the shaver to vibrate up to 10,000 times per minute. This will help lift your hairs into the head giving you a more efficient stroke with each pass.

You can also choose up to 3 speeds to match your beard thickens or skin sensitivity.

The head also comes with an active lift trimmer in the middle blade. This helps lift even more stubborn hair that try to lie flat on your skin. You can also help with this issue if you use a shaving brush before you shave to help lift the hair.

The octofoil that covers each blade is micro thin allowing the shaver to get as close as .05 mm, which is half the thickness of a human hair. These obviously won’t get as close as a safety razor which can cut even under the skin but are you really going to notice half a hair’s worth?

Each blade also sits on its own suspension as well as the entire head itself. Braun labels this as micro and macro motion. This lets the foil shaver perform almost like a rotary shaver around the contours of your face. The flexibility is really great.

You can also lock the head in its position if you want to keep it steady when working on trouble areas.

There is a pop up trimmer on the back which is always nice so you can quickly switch back and forth for shaping up your beard or sideburns and the shaver to get a smooth shave where you want it.

The cleaning solution is alcohol based so this will kill 99.9 of the bacteria on the blades which should help reduce irritation or acne from a dirty razor. 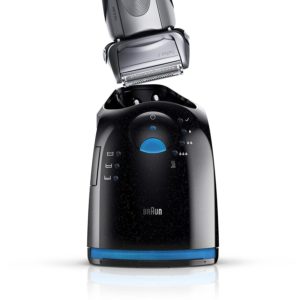 There is a fast-clean option that will clean it in 25 seconds but we are not really sure why you would need this unless you were sharing the razor with someone.

Of course, this razor has full wet & dry shaving capabilities which is a must for any razor to be considered in the top 10. This allows you to use a nice shaving cream or soap while you shave or even hop in the shower with your razor.

We find most men enjoy a wet shave keeping the skin wet is usually more comfortable.

The powerful lithium ion battery will give you more than 50 minutes of shaving time with just a one hour charge. If you average just 3 minutes per shave than this is 17 day’s worth of shaving on one charge!

You will also get a nice travel case and cleaning brush in the box which will help you keep it clean in addition to the charging station.

So, as you can see this has many awesome features that don’t come on the lower models. You also are not going to pay for some questionable features that might come with the more expensive models. This is that balance that we mentioned earlier.

When Should You Replace The Heads? 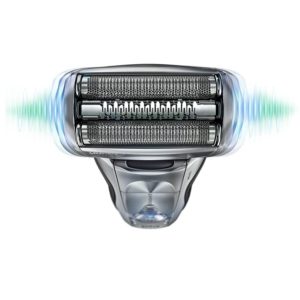 Braun typically recommends replace the foil heads every 18 months or so. However, you may be able to stretch this out depending on the frequency of use or if you don’t have a super thick beard. Those of you with thick stubble or who shaver everyday may need to replace after 12 months.

Replace the heads is well worth it as it brings your performance back to 100% in an instant. It is only normal for the blades to wear down over time cutting thousands and thousands of hairs.

The other thing you will have to replace are the cleaning solution cartridges. These will run out about every 3 months but only cost about $5-6 each to replace.

Other Shavers To Consider 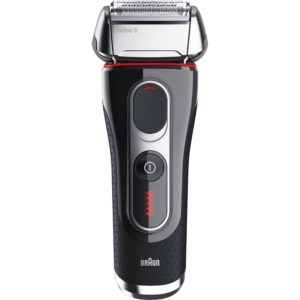 If you like the Series 7 but don’t quite want to spend the money, the Series 5 5090cc is another great option. It also happens to be the official shaver of the NFL!

Which doesn’t mean much since they paid for that sponsorship but it does come highly rated on Amazon and is moderately priced.

The head should work similarly to the Series 7 with the same micro and macro motion technology. Again, this helps the shaver be more effective around the contours of your face.  You can also lock the head at 5 different angles if you find one that you like the most.

The series 5 also comes with the active lift and CrossHair blades which are great for those softer hairs on your neck or chin.

This just happens to be a great, durable shaver that will last a long time if you take care of it. It doesn’t have all of the high-end features but it will still give you a close shave with a powerful motor for a decent price. 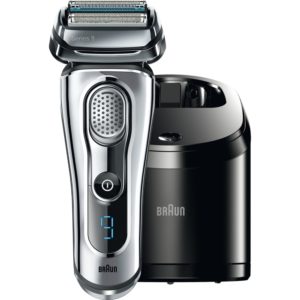 If you want to splurge a little you can go for the Series 9 9090cc. You will get many of the great features of the Series 7 with a few upgrades.

One of those upgrades just happens to be a fourth blade in the head! With the additional blade, you now get over 40,000 cross cutting actions per minute providing great efficiency and effectiveness.

Its own SyncroSonic technology helps lift hairs that might grow in different directions into the blades. This should reduce your shaving time and help reduce irritation for those of you with sensitive skin.

Many of the same features as the Series 7 include

Many reviews on Amazon talk about the Series 7 getting just a little closer than this model but if you like the idea of the fourth blade and possibly a quicker shaver than this could be the razor for you. Plus, at the time of this review, the 9090cc is just a little less than the newer 799cc-6. 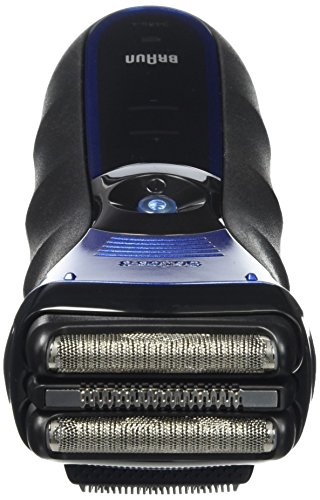 The 340S-4 is our favorite of the Series 3 models. Some may prefer the newer 3040S but we still feel like this one gives a better shave.

You are obviously losing some features as you go down the ladder but the Series 3 models can still give quality shaves and they of course do not cost as much.

You still get 3 independently suspended blades but the head itself is fixed so you lose some of that flexibility. The motor is also less powerful on these models.

You can still get a close shave with this razor and it is less than $100! The LCD display is not as intelligent but let’s be honest, you just need to know when you have a low battery.

This model does come with a charging stand if you like to use those but it is not the smart Clean & Charge station. It only charges the razor, but you can just use the cord if you need to save space.

This model still has a pop up trimmer and is completely waterproof up to 5 meters.  So, in terms of functionality you are not losing a lot but you will definitely notice the higher performance with the Series 7 models.

This has over 3,700 reviews on Amazon with a 4.1-star rating, it is quite a popular razor to say the least. This may be a good starter razor of gift idea for those of you looking.

Other Braun Models Worth Checking Out

Like we mentioned earlier, the best shaver for you may be different for everyone depending on what exactly you are looking for. We felt the Series 7 799cc-6 is going to be that razor for most people.

For those of you on a budget it may be one of the series 3 or 5 models but the 799cc-6 comes highly recommended from many people.

Do you own one of these? Let us know how you like it in the comments below 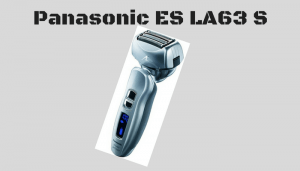 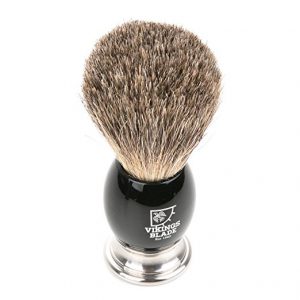 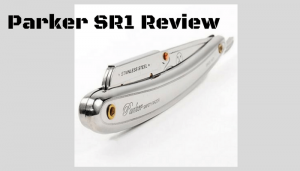 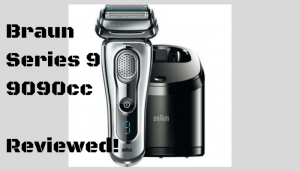 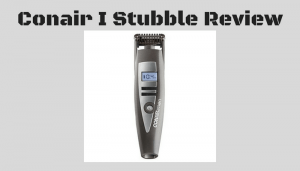